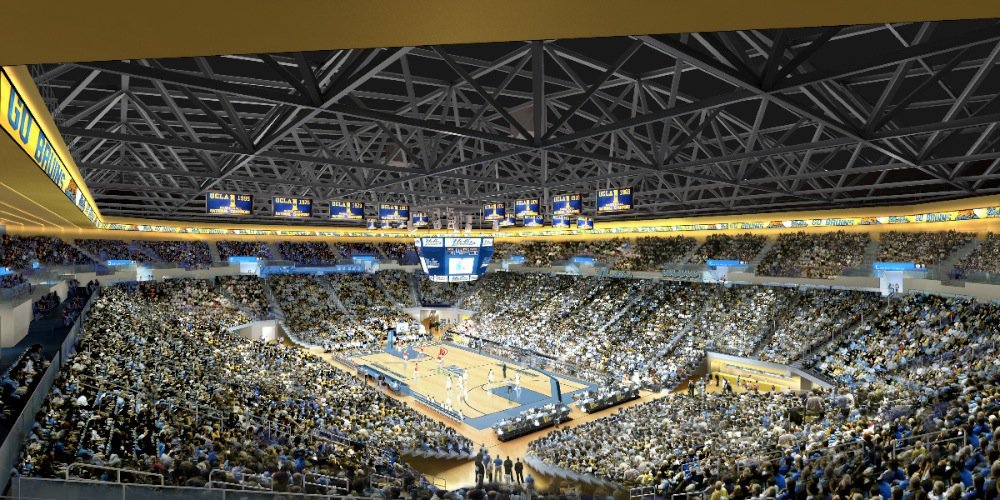 Pauley Pavilion contains 11,307 permanent theater-style upholstered seats, plus retractable seats for 2,492 spectators (466 seats without backs used by the band and students), making a total basketball capacity of 13,800. The capacity prior to the renovation (12,829) had been exceeded several times for several men’s basketball games by adding portable seating alongside the retractable seats.

Additionally, when the floor seats of Pauley Pavilion are retracted, there is space for three full-sized basketball courts. These courts are used for team practice, intramural games, and pickup basketball games. It can also serve as a convention hall or large dining area when in this configuration, making the stadium a great multipurpose venue.

One of the features of the stadium is the tunnel on the south side through which trucks and service vehicles may enter. It is also considered the “backstage” entrance for players, performers, and broadcast personnel to enter the court. The wooden floor is called “Nell and John Wooden Court” in honor of former UCLA Men’s Basketball Coach John Wooden and his wife Nell.

Before the construction of the Pavilion, the on-campus home to the UCLA Bruins men’s basketball team was the 2,400-seat Men’s Gym. It is currently known as the Student Activities Center, but then derogatorily known as the “B. O. barn.” After John Wooden led the Bruins to the national championship in 1964, a more suitable arena was clearly needed to be constructed. However, it had been obvious even before then that the Bruins needed a new arena. Since 1955, the Men’s Gym’s capacity had been limited to 1,500 by order of the Los Angeles fire marshal. Thus, major games that were expected to attract larger crowds were played at Pan Pacific Auditorium, the Los Angeles Memorial Sports Arena, and other venues around Los Angeles.

H.R. Haldeman (Chief of Staff of Nixon White House 1969-1973) spear headed the campaign to build a state-of-the-art sports arena. A million dollars was raised, which was matched by a donation from Edwin W. Pauley. The building was dedicated to the University of California Regent Edwin W. Pauley, at the June 1965 commencement ceremony by UCLA Chancellor Franklin D. Murphy.

The facility opened for the 1965–1966 college basketball season. The first game ever played in Pauley Pavilion was on November 27, 1965. It featured the freshmen team, led by Lew Alcindor, against the UCLA varsity squad, the two-time defending champions, and preseason No. 1 team. The freshmen, led by Alcindor’s 31 points and 21 rebounds, defeated the reigning varsity team 75-60. It was a surprise considering the varsity squad had finished as number one in the nation in the preseason. Ohio State was the first visiting team in the regular season and the Bruins defeated the Buckeyes in the inaugural game 92-66. Pauley Pavilion hosted its first NCAA Regional Finals in the 1969 post-season. The Bruins advanced from there to win the 1969 Championship.

In 2008, UCLA chose NBBJ as the architect firm for the new renovation and expansion project of Pauley Pavilion. According to a 2008 article in the UCLA Daily Bruin, “UCLA initially announced the project Jan. 11, 2007, when it hoped to have construction completed by legendary basketball coach John Wooden’s 100th birthday, Oct. 14, 2010. Since that announcement, the project has moved slowly, as UCLA has sought to raise funds for the project.”

The NBBJ design included an exterior glass concourse with natural light and room for concessions, restrooms, and merchandise. A revamped bowl with tilt-up seats, room for 1,000 additional fans, and better views of the court was part of the plan too. Furthermore, a Pavilion Club that accommodates up to 300 guests with food and bar service; and new men’s and women’s locker rooms, court floor, scoreboards, and media spaces were added.

The design also pays homage to the legacy of former UCLA Men’s Basketball Coach John Wooden, who led the Bruins to win a record 10 NCAA championships in 12 years. A statue of Coach Wooden is located at the main North entrance to the building. Where else, the east concourse is named Wooden Way. There is also a coach’s seat in section 104, row B, seat 6 — the only seat in Pauley Pavilion colored yellow instead of Bruin blue; and the floor bears the name of “Neil and John Wooden Court.”

The university unveiled the Pauley Pavilion renovation plans to the public. The kicked off the fund-raising campaign was on May 11, 2009, at Pauley and a groundbreaking ceremony was held a year later on May 11, 2010. Unfortunately, Wooden was in failing health and could not attend. He died three weeks after the groundbreaking ceremony, slightly more than four months before his 100th birthday.

Over the decades, multiple sporting and non-sporting events took place in Pauley Pavilion. A men’s basketball game against Indiana State on Friday, Nov. 9, 2012, was the first game at the new facility. The game honors Wooden’s coaching career at both schools. It was also the venue for Nickelodeon’s annual Kids’ Choice Sports Awards from 2004-2010 and many other concerts by world-class celebrities like Jay-Z and Beyonce.

For more information on the Pauley Pavilion at University of California, Los Angeles please read these additional pages:

Ticket Policies:
Read about our ticket guarantee and refund policies.

Sign up for our newsletter and get $5 off your first order!
You will also recieve a monthly “What’s On Guide” to your email!